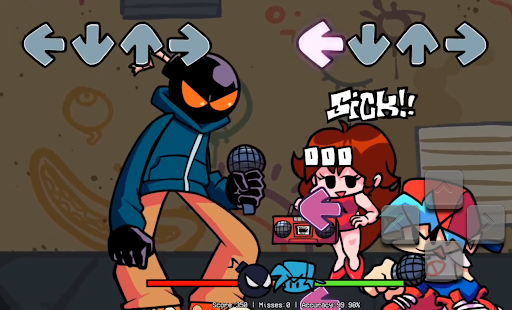 Beep bo bop! Friday night funkin music game is an indie rap battle rhythm based music game where you as the player need to press four directional button (left, right, up and down) in a sequence dictated on the screen in which your sense of rhythm will be challanged. Just like the original version, friday night funkin music mobile game still use 4 button as the main musical instrument for you to play. Just tap them in the screen.

The plot of friday night funkin music mobile game centers around our main protagonist, boyfriend (yes it’s his real name from the begining), who trying to hook up with girlfriend and make her to be his real girl friend. But if you want her as your girlfriend, you’re gonna have to go through girlfriend dad, an ex-rockstar named daddy dearest. Daddy dearest doesn’t approve you so the only way to prove your worthy is by win a rap battle 1 vs 1 with her dad and anyone else that stand boyfriend’s path so that, in the end, boyfriend can kiss his girlfriend.

In friday night funkin music game, each stage will be divided into each week from week 1 to week 6. Each week you will rap battle against different boss battle such as daddy dearest, the mom, pico, monster, senpai, also skid and pump. You can change your difficulty from easy to hard. It’s cute you think you stand a chance. But hey, you know what they say? Girls dig confidence. Time to get freaky! Three, two, one, Go!
Beat other people with rap battle and be the best in friday night funkin music game